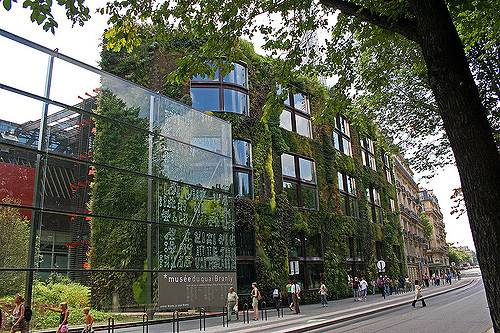 The museum of primitive arts, quai Branly or museum of arts and civilizations of Africa, Asia, Oceania and the Americas (non-Western). This new Paris museum is located in the 7th arrondissement of Paris not far from the Eiffel Tower, in the square occupied by the Ministry of Foreign Trade.

Like any ambitious and innovative project in its architecture (Architect Jean Nouvel) the construction and the realization of this Parisian museum was adopted and carried by Jacques Chirac (President of the Republic 1995-2007) to leave in the capital a cultural mark strong.

The museum brings together the old ethnological collections of the Musée de l’Homme (Palais de Chaillot) and those of the National Museum of Arts of Africa and Oceania (located at the Porte Dorée).

This architectural ensemble occupies an area of ​​40,600 m² spread over four buildings and exhibits 3,500 objects, selected from a collection that includes 300,000.

The museum itself, whose main gallery, 200 meters long, has several side rooms that are represented externally by the colored boxes.
The museum also includes an auditorium, classrooms, a reading room, a temporary exhibition space and a restaurant.
The “University” building includes a bookstore, offices and workshops.
The Branly building is adorned with a green wall of nearly 800 m2.
The Awning meanwhile includes the media library and reserves.

To go to the museum

Official website https://www.quaibranly.fr/
Price between 7 and 10 euros see the site for more details on all rates.
Open Tuesday to Sunday (closed on Mondays) according to the days from 11h to 21h.