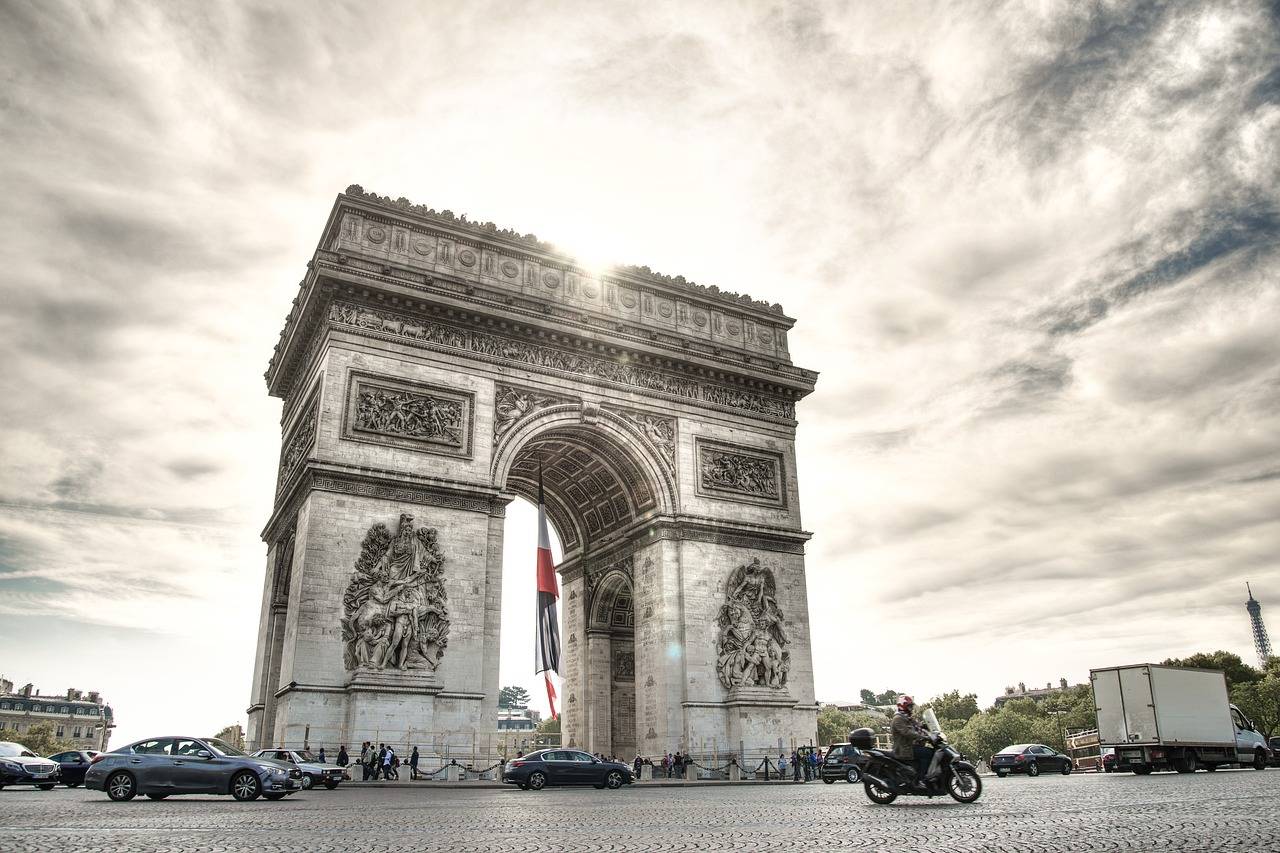 The Arc de Triomphe is known for its beautifully sculpted facade and for the tomb of an unknown soldier on which an eternal fire burns. François Rude’s La Marseillaise is the most famous of the sculptures. Inspired by ancient heroic tales, the work features a warrior angel armed with a sword calling on the French to defend their country (northeast pillar of the Champs-Élysées). The shield at the top of the monument lists Napoleon’s military victories. The Arc de Triomphe plays an important role in the celebration of national holidays in Paris. For example, the solemn commemoration of the national holiday, the storming of the Bastille (July 14) and the victory of the Second World War (May 8) takes place on the Arc de Triomphe. The sacrifice of the Unknown Soldier for the fatherland is commemorated each day by a moving ceremony.

From the high roof of the Arc de Triomphe, the viewer is confronted with a new vision of the layout of the “Place de l’Etoile” (Star Square), surrounded by twelve avenues designed by Haussmann, and the original elegance of the flint buildings. There are 284 steps leading to the top of the arch.

The Arc de Triomphe is one of the national monuments that have a strong historical connotation. Becoming a true symbol of patriotism, the monument welcomes on November 11, 1920 the body of an unknown soldier of the First World War. The flame coming out of the tomb commemorates the memory of the unknown soldier and is never extinguished: it is rekindled every evening at 6:30 p.m. by associations of veterans or victims of war. The Arc de Triomphe, whose construction was ordered in 1806 by Napoleon Bonaparte, is originally dedicated to the Imperial Army. The top of the monument is 50 meters high and 45 meters wide.

However, the construction was interrupted after the fall of Napoleon, which ended his career at the famous Battle of Waterloo. It was only King Louis Philippe who completed the Arc de Triomphe fifteen years after the death of the emperor, in 1836.

Christo was famous for his unconventional approach to landscape art. He was born in Bulgaria, but moved to Paris at the age of 23, where he met his partner Jeanne-Claude. Together they enthusiastically conceived a plan to cover the Arc de Triomphe with plastic sheeting. The idea was born in the 1960s, when Christo rented a small room near the Arc de Triomphe, and from then on the building attracted him. It was not until 2020 that it was possible to make this dream come true.

Unfortunately, Christo’s idea could not be realized, first because of the COVID-19 pandemic and then because of the artist’s death. The creator did not live to see the implementation of the idea, but the continuation of the plan took his nephew – Vladimir Javacheff. He stressed that the packaging of the Ark will be based on detailed sketches and rich documentation, which Christo left behind.

Ephemeral work of art for a few days

The Parisian work of art, will be on display for 16 days, from Saturday, September 18 to Sunday, October 3, 2021. The project is realized in collaboration with the Centre des Monuments Nationaux and with the coordination of the City of Paris. The initiative has also received the support of the Centre Pompidou. The Arc de Triomphe will be wrapped with 25,000 square meters of recyclable silver-blue polypropylene and 3,000 meters of red rope. The whole thing is expected to cost 14 million euros, a sum that will be covered by funds raised through the individual activities of Christo and his colleagues. The project did not receive any funding from public institutions.

In 1995, Christo and Jeanne-Claude wrapped the fabric around the Reichstag in Berlin, the Pont Neuf in Paris wrapped in September 1985, while still dreaming of leaving a similar accent on the Arc de Triomphe in Paris. Today, the project is being realized before our eyes and adds variety to the landscape of the French capital.

Some pictures of the Arc de Triomphe wrapped

How to get to the Arc de Triomphe