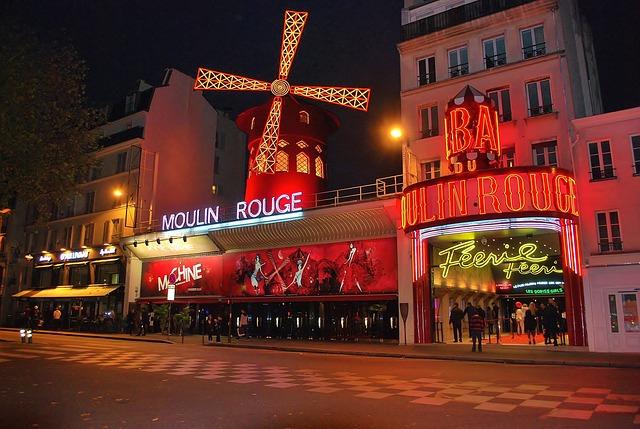 Famous all over the world for its famous French cancan, the Moulin Rouge is part of the purest tradition of music-hall made in France and has always presented sumptuous revues.

For this, the best ingredients are brought together: feathers, rhinestones, sequins, fabulous decorations, original music, great professionalism and a sequence of paintings which does not leave room for boredom.
The Doriss Girls, who are certainly among the most beautiful girls in the world, will enchant you and take you into the fairytale world of their magnificent magazine, rightly named “Féerie”.

A bit of history

As the whole world was developing at an accelerated pace and the industrial revolution swept across Europe … The year the world’s tallest building – the Eiffel Tower – opened, and in Paris they were preparing for the Universal Exhibition … In 1889, a Moulin Rouge was opened in a village near Paris.

At the time, Montmartre was an alcohol tax-free zone. Therefore, those who we called bohemian walked and had fun here: artists, actors, writers. At that time, there were 30 mills in Montmartre. They ground grain, corn.

The word “cabaret” comes from Dutch and means a small room to drink alcohol. So they started calling it a comfortable, warm and friendly environment where you can have fun.

The secret of popularity

To draw attention to the establishment, the organisers have laid out a garden and placed a huge elephant. The name of the cabaret was given to the “First Women’s Palace” and the road to success was not long.

In 1893, one of the dancers dispersed and undressed completely on the stage of the Moulin Rouge . It was therefore in this institution that a striptease was performed for the first time in history.

Among other artists, the famous songwriters Charles Trenet and Charles Aznavour performed at the Moulin Rouge. There were many famous names among the guests. On 26 October 1890, the Prince of Wales, later Edward VII, visited the Moulin Rouge on a private visit to Paris.

Achievements of the Moulin Rouge cabaret

Is there anyone in the world who has never heard of the “Moulin Rouge”? Only once on St. Patrick’s Day in 2011, the Moulin Rouge gave its red light to switch to Irish green for one night.

The cabaret could only leave its mark on the art of cinema. No less than six films bear the same title!

The cast of the Moulin Rouge cabaret in Paris has set 6 world records, including the Cancan troupe rewarded for the highest number of leg sweeps. No wonder!

And curiously enough, the Moulin Rouge is one of the biggest buyers of champagne in the world: around 240,000 bottles a year!

How to get to the Moulin Rouge