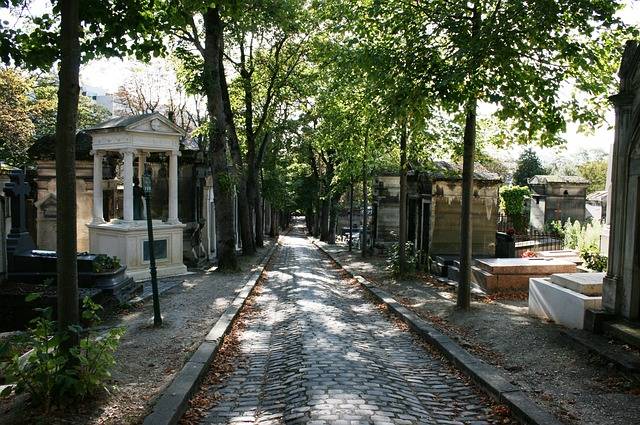 The most famous of the Parisian cemeteries (20th arrondissement) takes its name from the former owner of the place, the preacher of Louis XIV, Father de La Chaise. If you are interested in this form of morbid tourism, you can choose between several cemeteries, the most prestigious being Père Lachaise. Is today the most visited cemetery in the world (hundreds of thousands of visitors each year)

One of the most famous necropolises in the world is the Père Lachaise cemetery in Paris, which is not as old as my other favorite, the St. Peter’s cemetery in Salzburg, whose catacombs date back to the beginning of Christianity, but which is just as interesting. After the expulsion of the Jesuits in 1763, the City of Paris acquired the property in 1803 and transformed it into a cemetery according to the plans of Brongniart. The walk allows you to admire 19th century sculptures and numerous funerary monuments. At the end of the walk, the Fédérés wall recalls the bloody episode of the Paris Commune, an insurrection during which 147 people were shot on May 28, 1871. The site of the cemetery once belonged to a Jesuit monk, Père de la Chaise, who was confessor to Louis XIV. In 1804, Napoleon ordered the purchase of the land and the construction of a cemetery. In order to establish the reputation of the cemetery, the order did not hesitate to rebury the dead.

With its 44 hectares and its 5000 trees, Père Lachaise is also recognized as “a city of the dead in the heart of the city of the living”. It also owes its reputation to the celebrities who chose it as their final resting place.

Père Lachaise is visited by most young people for the memory of Jim Morrison.

In addition to Morrison, many celebrities are buried in this cemetery, to name a few: Frédéric Chopin, Maria Callas, Antoine de Saint-Exupéry, Honoré de Balzac, Marcel Proust, Oscar Wilde, Edit Piaf, and the surprisingly modest graves of the most famous actor couple of post-war France, Simone Signoret and Yves Montand.

The tomb of Victor Lenoir, a great seducer before the Eternal, is worshipped by sterile women who want to keep hope… Other great names of the arts and sciences such as Balzac and Champollion the Egyptologist, have chosen their final resting place here. As for Heloise and Abelard, they have been lying under a neo-gothic mausoleum since 1817.