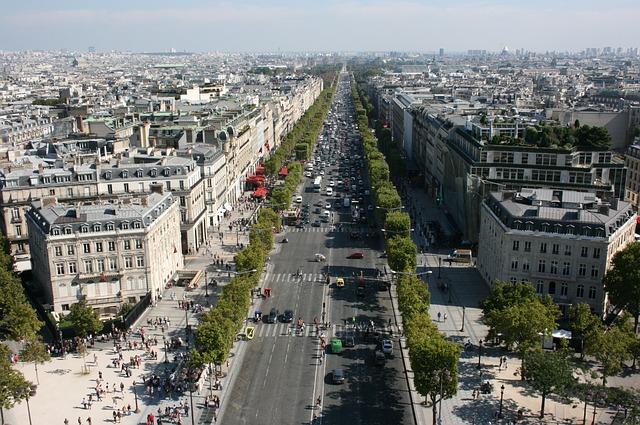 From Place de la Concorde to Place Charles de Gaulle-Etoile, this artery, traced by Le Nôtre, who was commissioned by Louis XIV to redesign the Tuileries Gardens, allowed the royal gaze from the Tuileries Palace to follow the course of the sun’s star and see it setting in the extension of what would become the Champs-Elysées. No wonder the Sun King foreshadowed the future of this triumphal path.

In the 18th century, its extension to Normandy via Neuilly was based on practical rather than aesthetic considerations.
The Avenue des Champs-Élysées is today extended by the perspective of the Grande Arche, which by its dimensions on the scale of the futuristic district of La Défense announces a change. Indeed, the opening towards the future no longer materializes towards the capital but rather towards the outside, in this case this business district on the outskirts of Paris which reminds us that the suburbs are now more populated than the capital itself.

In 1804 Napoleon I gave a sumptuous reception there on the occasion of his marriage to Marie-Louise. From the end of the last century, the gardens of the Champs-Élysées welcomed walkers who came to enjoy the leisure activities offered by the Avenue, which had become a showcase of progress. From the Bal Mabille to the Lido, from the Café des Ambassadeurs to Fouquet’s, from the Panorama to the theatres, strollers discovered the latest technological developments in industry, automobiles and cinema.

The stretch between the Rond-Point roundabout – whose Lalique glass fountains disappeared during the German occupation – and Concorde is lined with chestnut trees and municipal flowerbeds, pleasant enough for a stroll. The two massive buildings that dominate the greenery to the south are the Grand and Petit Palais, with their overcrowded neoclassical exteriors, railway station roofs and exuberant flying statues. They are home to numerous museums and the Grand Palais is the address for the main cultural exhibitions.

The construction of the Arc de Triomphe to the glory of the Grande Armée in 1836 gave rise to the military parades that began with the victory of 1918 with the parade of 14 July 1919.

The deposition of the ashes of the unknown soldier under the Arc de Triomphe in 1921 confirmed the martial vocation of this descent of the Champs Elysées. General de Gaulle and the allied troops were cheered there for the liberation from German occupation after the Second World War. Since then, this honour has been reserved for foreign heads of state, celebrations of sporting victories and other exploits as well as popular jubilation events such as New Year’s Eve where every year at midnight thousands of revellers come to kiss each other in a concert of horns forming a gigantic and joyous traffic jam.