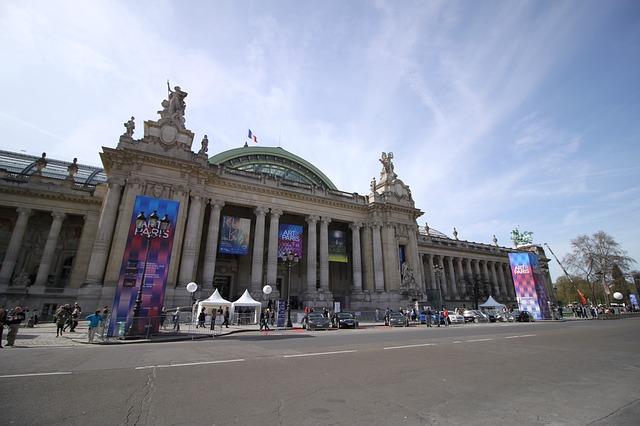 The 1900 exhibition saw the construction of the Grand and Petit Palais, in the spirit of monumental metal structures as exhibition venues, thus making a counterpart to the Eiffel Tower, considered at the time to be a useless folly by many.
After having been the venue for major annual events (the Motor Show and the Household Arts Show), the Grand Palais was completely refurbished. With 5,000 m2 of rooms devoted to temporary exhibitions, the Galeries Nationales du Grand Palais became a cultural centre.

Created by André Malraux, the Galeries Nationales have no permanent exhibitions. Their mission is to host the major temporary exhibitions organised in particular by the Réunion des musées nationaux, the Association Française d’Action Artistique and the Délégation aux Arts Plastiques.

Since 1966, the following exhibitions have been presented there: the Centenary of Impressionism, the retrospectives of Monet, Watteau, Renoir, Degas, Gauguin, Toulouse-Lautrec, Poussin, Cézanne, but also the exhibitions of the Birth of Writing, the Etruscans and Europe and Amenophis III.

The western part of the Grand Palais is occupied by the Palais de la Découverte and the southern part by the University of Paris IV.

The Palais de la Découverte provides a better understanding of our environment through experimentation with the great laws governing science. The visitor will thus learn the basics of electrostatics, radioactivity and chemistry.
Finally, under the Dome you can discover the planetarium which allows you to travel through time and space for a moment.

The beautiful Petit Palais building, built by Charles Girault for the 1900 Universal Exhibition, houses important collections that offer a wide panorama of artistic creation from Antiquity to the beginning of our century. The Ancient Art collection is mainly due to the sagacity of the Dutuit brothers who bequeathed in 1902 their rich collection of antique and medieval objects, their precious pieces of the French and Italian Renaissance and their famous cabinet of Flemish and Dutch paintings. This collection was completed by the 18th century paintings and sculptures, tapestries and objets d’art of the Tuck donation.
In addition, the Museum has a remarkable collection of 19th century works, as well as major donations (Courbet, Carpeaux, Carriès, Cézanne). The works on display reflect the main pictorial currents of the century.

How to get to the Petit and Grand Palais