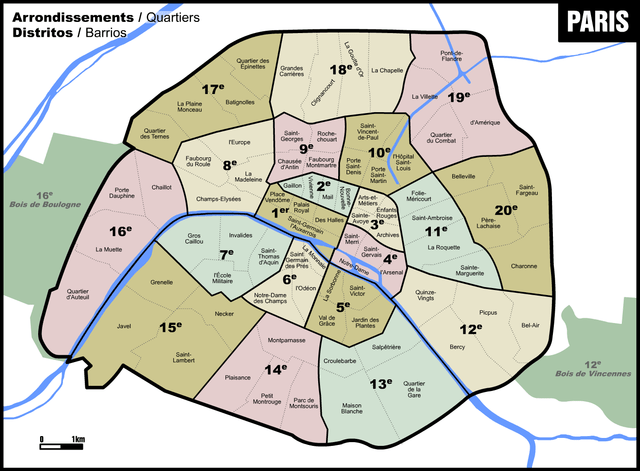 The least densely populated of Paris’ 20 arrondissements is located in the geographic center of Paris, hence the presence of many historical attractions. The Louvre Museum, the Royal Palace, the Tuileries Gardens, the aristocratic Place Vendôme, Les Halles, the main food market in Paris, the Sainte-Chapelle (medieval Gothic royal chapel) and much more.

This is primarily a business district, with the Palais de la Bourse – former stock exchange – being the most notable landmark. Another important building in the smallest of the Parisian arrondissements is the historic Bibliothèque Nationale. A modern extension of the library is located in the 13th arrondissement of Paris. The 2nd arrondissement also has a number of historic shopping centers.

The arrondissement includes the quieter northern part of the medieval Marais district with good, large open-air food markets. It also includes the Carnavalet Museum – dedicated to the history of Paris.

Several squares, Place de la Bastille, Place des Vosges, Notre Dame Cathedral, Centre Pompidou, Ile de la Cité (the island of the Seine, in the center of Paris). It is one of the two natural islands of the Seine and is considered the old center of the city. The 4th arrondissement is still known for its small streets, cafes and stores, and includes the southern part of the medieval Marais district, which is now known as the gay district of Paris (while the northern part of the Marais, which is quieter, is contained in the 3rd arrondissement).

With its famous Sorbonne University, is located in this arrondissement. An area dominated by universities and colleges, a fascinating neighborhood with the city’s botanical gardens, and narrow streets, bustling with student life. The popular boulevard St-Michel, the central axis of the Latin Quarter, with its cafés, cinemas, clothing stores, and crowds of students and tourists.
The 5th arrondissement is also one of the oldest districts in the city, dating back to antiquity. You’ll see a Roman amphitheater (Arènes de Lutèce), ruins of Roman baths and spas (Thermes de Cluny), while one of the arrondissement’s most famous attractions is the Pantheon.

One of the most fashionable and expensive districts in Paris. The 6th is generally one of the richest districts in France. One of the largest parks in the world, the Luxembourg Gardens, is located in this arrondissement, popular with residents and visitors alike. It is the intellectual and artistic bastion of Paris: you will find many literary cafés, bookstores, art galleries, restaurants and nightclubs.

The 7th Arrondissement is the heart of Paris. It includes some of the most important tourist attractions of Paris, such as the Eiffel Tower, the Hôtel des Invalides (Napoleon’s resting place), various museums such as the Musée d’Orsay, the Musée Rodin and the Musée du Quai Branly, as well as the headquarters of UNESCO

Another district full of tourist attractions. The Champs-Élysées, the Arc de Triomphe, the Elysee Palace, official residence of the President of the French Republic, the romantic Parc Monceau are some of the attractions. A district with beautiful stores, cinemas and offices. The 8th arrondissement, along with the 1st, 9th, 16th and 17th arrondissements, is one of the main business districts of Paris.

The 9th Arrondissement is the most important district in Paris and contains many places of cultural, historical and architectural interest. A multi-faceted district, with on one side the Palais Garnier, home to the Paris Opera, and the Galeries Lafayette, a well-known department store, and on the other, at the border of the 9th and 18th arrondissements, the Place Pigalle, a less prestigious district, known as a tourist area, with many sex shops and other cabarets.
Along with the 2nd and 8th arrondissements, it is also home to one of the business centers of Paris, located around the Opera House.

The 10th arrondissement includes two of Paris’ main train stations – the Gare de l’Est and the Gare du Nord, from which Eurostar trains leave for London, Brussels and Amsterdam. It also includes a large portion of the Canal Saint-Martin, a canal that connects the northeastern districts of Paris to the Seine.

The eleventh arrondissement is a diverse and interesting neighborhood. To the east, by tree-lined Avenue Richard-Lenoir with great markets and parks for kids. Place de la Bastille and Rue du Faubourg St. Antoine are full of cafes, restaurants and trendy nightlife spots, as well as numerous boutiques and galleries. Oberkampf, to the north, is another popular nightlife area.
Located on the right bank of the Seine, the 11th is one of the most densely populated urban areas, not only in Paris but in any European city.

Here you’ll find the Grand Opéra de Bastille, the Place de la Bastille, the large Paris Gare de Lyon train station, the third busiest in France and one of the busiest in Europe; high-speed and long-distance trains leave from here for the south of France, Switzerland, Germany, Italy and Spain.

The 13th arrondissement of Paris is primarily an urban and business district. The Asian Quarter, located in the southeast of the arrondissement, is an area that includes many high-rise buildings (arrondissements). You will also find the modern national library, which is the most important landmark of the district. There is also a high concentration of Chinese and Vietnamese businesses, much like the Chinatown area of Paris.

The largest of the 20 arrondissements, both in size and population. You’ll see the tallest skyscraper in Paris, the Montparnasse Tower, and the Parc André Citroën, one of the most interesting modern parks in Paris.

A district that doesn’t have many attractions.

One of the most picturesque districts in Paris, this once bohemian and still picturesque neighborhood is often flooded with tourists. The Sacré-Coeur Basilica, the Moulin Rouge and the Place du Tertre are the main attractions of the arrondissement. The Place du Tertre is a reminder of the time when Montmartre was the Mecca of modern art. In the early 20th century, many penniless painters, such as Picasso and Utrillo, lived there. On the Place du Tertre, many artists set up their easels for tourists every day.

You will find one of the most interesting parks in Paris, the Buttes-Chaumont park, which is located in the middle of this arrondissement, the Parc de la Villette and the city’s science museum.

An arrondissement that doesn’t have many attractions, it is mostly composed of a residential and cosmopolitan district.