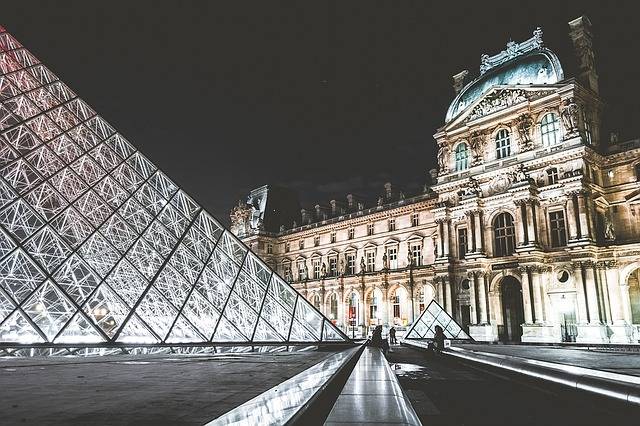 The Louvre Museum is the largest museum in Paris by its surface (more than 160 000 m² of which 58 470 devoted to exhibitions). The Louvre currently has several very rich collections of works of art from different civilizations, cultures and eras such as:

not forgetting a collection relating to Art and Civilizations of Africa, Asia, Oceania and the Americas. It is rich of about 300 000 pieces, of which only 35 000 are exposed. It is one of the oldest museums and the third largest in the world. It houses several of the most famous paintings in the world: The Mona Lisa by Leonardo da Vinci, The Freedom Guiding the People, Eugene Delacroix and The Oath of Horaces by Jacques Louis David.
His situation in Paris

Located in the heart of the city of Paris, between the right bank of the Seine and the Rue de Rivoli, in the 1st arrondissement, the building is a former royal palace where you will find the equestrian statue of Louis XIV in the Napoleon Court.

Since it is about image; know that the Louvre Museum has often served as a backdrop and location for film (120 shoots in 2013); Here is a list of some world-famous films where the Louvre is showcased and serves as a movie set: The Lovers of the Pont Neuf, a film by Léos Carax. The Da Vinci Code, a film by Ron Howard (2006) has given a huge visibility to the Museum or Luc Besson with his film Lucy, the Smurfs 2, Wonder Woman, Fifty shades lighter.

With a record attendance of 8.7 million visitors in 2017 (prospective 2018 the 9 million), the Louvre is by far the most visited art museum in the world, as well as the most visited monument in Paris. Place of culture par excellence; The Louvre has powerful tools including an auditorium where conferences, debates, reading sessions or concerts take place.

How to get to the Louvre

To know: the Louvre Museum is free for all the first Sunday of the month of October to March, and the 14 of July.