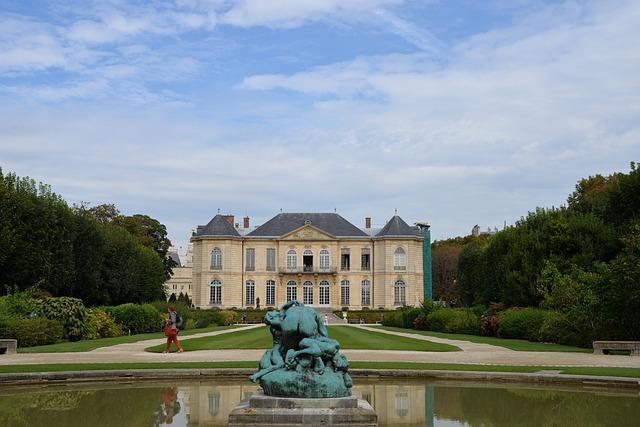 You’ve probably seen at least one work by Auguste Rodin. The Rodin Museum has the advantage of being a little out of the way of tourists visiting Paris.
The museum opened in 1919 at the Hotel Biron, where Rodin used to create. The idea to create a museum came from Rodin himself.

The old and devout Duchess of Charost ceded the estate in the 1820s to the Company of the Ladies of the Sacred Heart of Jesus, founded by Sophie Barat and dissolved by the state in 1904. Immediately afterwards, hastily built dwellings on the estate became artists’ residences, welcoming Isadora Duncan, Cocteau, Matisse, Rilke and above all Rodin at the height of his glory, whose fame saved the hotel from being demolished.
At the end of 1911, the State bought the hotel. The public demanded the creation of a “Rodin Museum”.
In 1916, Rodin undertook to hand over to the State all his collections and it was in 1919, two years after Rodin’s death, that the museum opened its doors to the public.

He donated his sculpture collection to the French government, but in return asked that the Hôtel Biron building be turned into a museum dedicated to his works.

From there, the entire space, including the adjoining garden, now houses another 300 works by Auguste Rodin and a few paintings by Monet from the French artist’s personal collections.

The Rodin Museum still has a room with works by Camille Claudel (the artist was Rodin’s pupil, assistant and lover) and a restaurant in the garden.

Who was Auguste Rodin

Self-taught, Rodin was born and lived part of his life in the suburbs of Paris. He became interested in art and drawing when he was still a child.

At the age of thirteen, he entered La Petite École, a school specializing in arts and mathematics. After his studies, he worked as a craftsman and even as a designer in a porcelain factory in Sèvres. Over the years, Rodin became more visible and his work began to be successful.

Unlike many artists, Rodin managed to enjoy recognition and fame for his work before his death. To this day, Rodin remains one of the few sculptors known outside of the visual arts community.