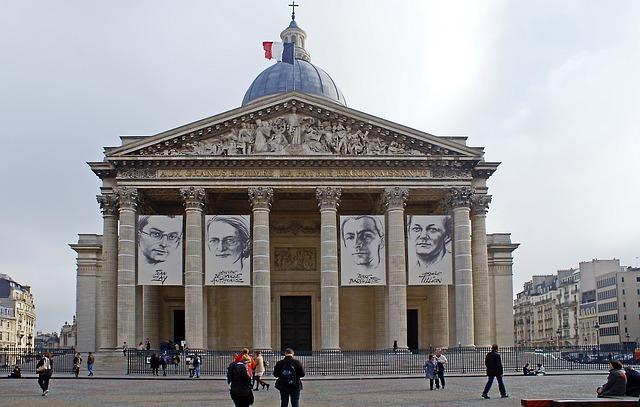 Located on the hill of Sainte-Geneviève, in the 5th arrondissement of Paris, near the Luxembourg Gardens and opposite the University of Paris (Sorbonne), the Pantheon is one of the great monuments of Paris. Fascinating from afar by its neo-classical architecture, the building is a work of art by the architect Soufflot (who is also buried in the Pantheon).

The Pantheon in Paris is the place where the great men of the country are buried. Personalities who distinguished themselves in various fields, making France proud. This is why, if you look carefully at its façade, you will see the inscription: “To great men, the grateful homeland”, next to the interesting bas-relief by David d’Angers, alluding to the homeland’s tribute to its imposing heroes.

Great names of science, art, politics and the army are buried here. Walking through its galleries, one can recognize tombs such as those of Pierre and Marie Curie (physicists), Louis Braille (creator of the reading system for the blind), Jean-Jacques Rousseau (philosopher), Alexandre Dumas (writer), Voltaire (writer), Jean Jaurès (politician), René Descartes (philosopher, physicist and mathematician), Jacques-Louis David (painter), Louis Antoine de Bougainville (navigator and officer), among others.

Much more than a mausoleum!

But the Pantheon in Paris is more than a mausoleum. The building is truly impressive. With a ground floor hall filled with columns and works of art. On its side walls you can see huge canvases and sculptures that combine religious and republican elements. Looking upwards is the beautiful dome and in its centre is the famous Foucault’s pendulum. This pendulum is a scientific experiment carried out here in 1851 to demonstrate the rotation of the Earth on its own axis.

History of the Pantheon in Paris

The Pantheon was built to be a church in honour of the city’s patron saint, Sainte-Geneviève. King Louis XV fell seriously ill in 1744 and, in gratitude for his recovery, he ordered the construction of a temple in homage to the saint.

Since the 5th century, there was already a small church dedicated to Sainte Geneviève in this place, which was in ruins. It was therefore the chosen place. And the architect Jacques-Germain Soufflot directed the construction, the beginning of which was postponed for various reasons until 1764. Soufflot died in 1780, but the construction of the new church was already well under way and Jean Baptiste Rondelet completed the work in 1790, during the French Revolution.

The plan called for a Greek cross with a high dome, inspired by the Roman pantheon. The Pantheon was created with the intention of combining the simplicity of Gothic architecture with the majesty of Greek architecture. And the Pantheon of Paris was the first place where you could see the city from above.

From the church to the Pantheon

Already in 1791, the Catholic Church was discredited and the revolutionary government did not look favourably on the transformation of the beautiful monument into another church. So the French National Assembly voted that the building, which had not yet been consecrated as a church, should have the function of a mausoleum and house the bodies of the country’s illustrious men. And the building was remodelled by Quatremère Quincy, who gave it its present appearance.

During the almost 100 years between the First French Empire, with Napoleon I, and the advent of the Third French Republic, the place changed function several times. The building was used for both religious and patriotic purposes, depending on the political regime in power, and twice became a church again. Until the Third Republic, with the funeral of Victor Hugo (writer) in 1885, the building became the final resting place of the great men honoured by the French Republic.

The word “Pantheon” is of Greek origin and means “a temple of all gods”. And since 1920, the Pantheon in Paris is classified as a historical monument.

The Greco-Roman façade of the Pantheon is grandiose and impressive. Inspired by the Roman Pantheon, the most famous of all the pantheons, this facade has 22 Corinthian style columns supporting a triangular pediment by David of Angers. The whole building is monumental and can be seen from afar. Its facade and dome are visible from afar, particularly because the structure is located at the end of a street that goes up the hill of Sainte Geneviève. After all, Soufflot’s ambition was to make a church to the standards of St. Peter’s Cathedral in Rome and St. Paul’s in London.

When you walk through the door, greatness is more evident. Its vast interior is obviously gothic, and magnificent. The building has the shape of a Greek cross and its centre is marked by an incredible 83-metre high dome. Its dimensions are generous, 110 metres long and 84 metres wide, housing 100 Corinthian columns and numerous works of art.
Its interior is what is known as Neoclassicism, as it is a tendency of the architects of the time to reproduce classical details in a new context. Here we see the reproduction of the pure lines and scale of Greek buildings several centuries later in a new environment.

This part of the field is the one that attracts the most attention. With the decorated floors, the countless columns, the incredible dome, everything here is majestic. Walking along its sides is a pleasure for the eyes, because on its walls are monumental paintings representing important moments in the history of France.

In these paintings, one can distinguish different themes, but one should not fail to observe the cycle painted by Chavannes, telling the life of Saint Geneviève de Puvis. And also the cycles that tell the story of the beginnings of Christianity and the monarchy in France. Chavannes began painting the place in 1874, and can be said to have been the greatest fresco painter of the 19th century. Don’t miss the paintings of Joan of Arc’s life either.

The dome of the Pantheon is undoubtedly one of its strong points. Inspired by Saint Paul’s Cathedral (London) and the Dôme des Invalides (Paris), it does not go unnoticed. Entirely surrounded by windows, it has a fresco by Antoine-Jean Gros in its centre and can be climbed in summer.

Climbing up the dome requires a little effort, as some 200 steps have to be climbed. But the view pays off! From there you can see the magnificent Luxembourg Gardens, with the Eiffel Tower just behind, the Invalides and also the Notre-Dame Cathedral on the right.

Unfortunately, it is only possible to climb this dome during the summer. Climbing takes place every half hour with groups of up to 50 people and visits last 40 minutes. The great advantage is that it is rare to have to queue to enter the Pantheon or even to climb the dome.

Like the dome, Foucault’s Pendulum is one of the most striking structures in the Pantheon. It is an experiment with a metal ball that hangs directly in the centre of the beautiful dome and in the middle of the Pantheon, surrounded by a round acrylic “fence”. The function of the device is to prove the rotational movement of the planet Earth.

On January 3, 1851, the French physicist Jean Bernard Foucault carried out the same experiment at home, using a two-metre long pendulum that allowed him to swing close to the ground. Four weeks later, he performed another test at the Paris Observatory, now with a twelve-meter long pendulum. And on March 26, 1851, with the permission of Louis Napoleon Bonaparte, a great lover of history and science, he placed a 67-metre pendulum in the middle of the Pantheon to prove his thesis of the Earth’s rotation.

The pendulum hangs vertically and when it is moved, the stiletto that is attached to the sphere makes a mark on the thin layer of sand that is deposited on the ground. And with each passage of the sphere, the mark on the sand gradually increases. With this simple and direct demonstration, we can prove the movement of the earth.

Today, on the spot, you can find a replica of Eddy’s pendulum and you can understand live how the experiment works. The exposed metal sphere measures 20 centimetres and weighs 28 kilograms. Bathed in 24-carat gold, it is suspended by a 67-metre long vertical wire running out of the middle of the dome.

The crypt in the basement

The tombs are in the basement, which is reached by going down one of the two side stairs.

When you get underground, you enter a round chamber from which a system of corridors with countless chapels starts, where the historical personalities are located. At their entrance there are panels with names and the terminal where you can consult the personality’s biography, with details about his life and work.

Walking through the corridors, it is easy to recognize the famous and important names. Names like Voltaire, Rousseau, Victor Hugo, Marie Curie, Emile Zola, Louis Braille or Alexandre Dumas. And even the architect of the Pantheon, Jacques-Germain Soufflot.