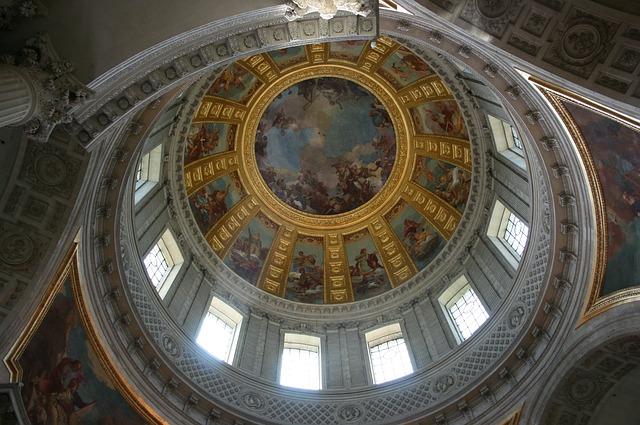 The Hôtel des Invalides is famous for its dome, which was covered during its restoration in 1989 with more than 555,000 gold leaves laid by ten master gilders. Today the Dôme des Invalides houses the ashes of Napoleon brought back in 1840. The hospital tradition continues with a state-of-the-art surgical hospital.
The North-West wing houses the Army Museum and the immense Esplanade des Invalides designed by Robert de Cotte stretches as far as the Seine.

In 1670, King Louis XIV adopted Liberal Bruant’s plans for the construction of a hospice to shelter the war-wounded, otherwise condemned to theft and begging. But King Louis XIV also had other interests, such as that of “hiding” these wounded in the eyes of the population, since many of them wandered around the Pont Neuf and the rich streets of Paris. This work, the second largest after that of Versailles, began in 1671. The soldiers’ church was opened in 1677. On the other hand, it was in 1706 that the consecration of the royal church, famous for its golden dome, marked the completion of the work. This place was at the same time a hospital, a hospice and a barracks.

This large church, famous for its magnificent dome, is a fine example of the Baroque style. Built between 1679 and 1706 during the reign of Louis XIV and for its sole use, it was dedicated to the veneration of Emperor Napoleon I from 1840 onwards. The body of Napoleon I is buried here. In honour of all the armies of France, military trophies decorate its vault under which the remains of heroes of the past, including Marshals Foch and Lyautey, are preserved. The outside of the dome was gilded in 1715. Its ceiling is decorated with a fresco representing Saint Louis and Christ. The church is located in the Hôtel des Invalides.

In 1814, the ashes of Napoleon I were transferred to the Invalides and his tomb was built. From 1871 onwards, Les Invalides began to become a museum, with a few wounded people still inside. Even today, the Invalides still houses about a hundred veterans of the French armies.

In 1905, today, the museum counts 500,000 objects and is the most important military history museum in France. There are military objects from antiquity to the 20th century.

Church of the Dome and Tomb of Napoleon I

With its golden dome seen from different points in Paris, can also be visited. At 107 metres high, admire its interior decoration. It is one of the most famous churches in Paris.

One of the main attractions is the gigantic tomb of Napoleon I. It is also possible to see several sculptures, including those of Napoleon’s brothers and that of Marshal Foch.

Inaugurated in 1679, this classical-style cathedral pays homage to Saint Louis (Louis IX). Initially, King Louis XIV and the soldiers attended mass together in the cathedral, but they entered from different places.

This is a multimedia space dedicated to General Charles de Gaulle, former French President, and was very important for the liberation of France from the Nazi regime during the Second World War.

This museum presents a unique collection of models from over 200 years of military history. It has 28 models of fortified towns between 1668 and 1875, which were used to define military strategy.

When and how to visit the Invalides