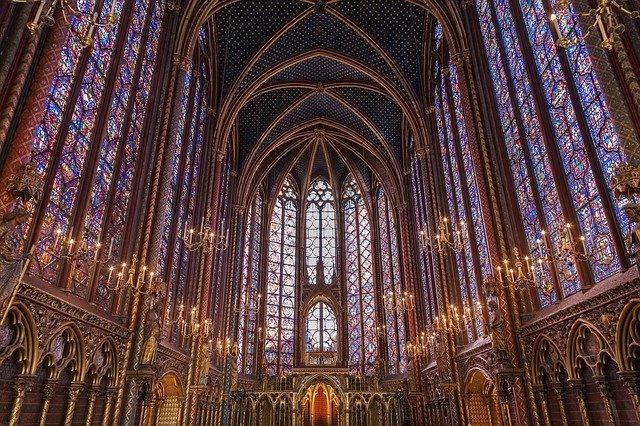 The Sainte-Chapelle was built in the 1240s as a royal chapel. The chapel was part of the Palais de la Cité, a royal palace located on the Île de la Cité, which was the residence of French kings from 500 to 1300. King Louis IX built the chapel to house his collection of relics.

The king acquired more relics from the emperor of Constantinople to store in his new chapel. Amusingly, the chapel itself, with all its huge stained glass windows, cost less than half the price of a decorative silver casket made to house the relics. The relics purchased in Constantinople were even more expensive, for the price of which three chapels and a bit more could have been built. The king himself carried the relics through the city on the last leg of his journey, barefoot and modestly clothed. This operation is depicted on one of the stained glass windows. The king was later declared a saint.

As the power of Constantinople and the Holy Roman Empire weakened, France became the center of the Western Christian world. The Sainte-Chapelle is part of a continuum of palace chapels. They were characterized by their close connection with the royal residence. The Sainte-Chapelle thus had not only religious but also political significance. The kings of France were keen to emphasize their role as successors to the first Germanic Roman emperor.

The chapel is today one of the oldest surviving parts of the royal palace and was protected as a national monument in 1862. It is also on the UNESCO World Heritage list among the other historical monuments along the Seine. Most of the relics kept in the chapel were destroyed during the revolution and the opulent silver casket that housed them was melted down. The remaining relics are now kept in the cathedral of Notre-Dame.

The chapel itself is now surrounded by the Courthouse on Île de la Cité near Notre-Dame. It has two “floors”, the first at ground level being rather dark and close, the second having high radiating windows and a small balcony.

How to get to the Sainte Chapelle