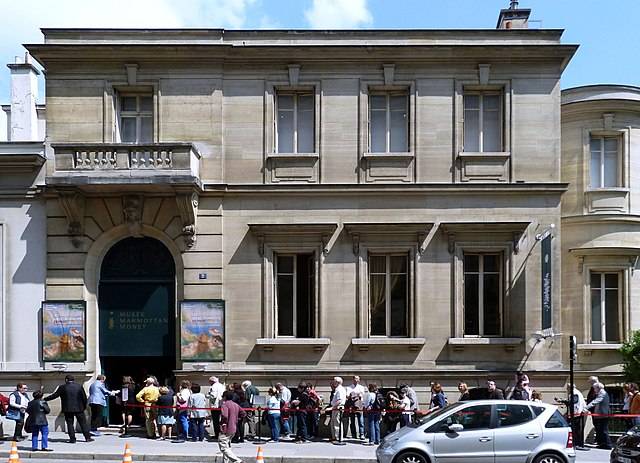 The museum is housed in the 19th-century residence of collector and art historian Paul Marmottan, whose fine collection of medieval, Flemish, Renaissance and Napoleonic art he left to the Institut de France in 1932.

It includes such marvelous pieces as Gauguin’s Bowl of Flowers from Tahiti, Corot’s Lake Ville d’Avray through the Trees, and Sisley’s Canal du Loing in Springtime, as well as the largest collection of Monet paintings in the world.

Formerly the hunting lodge of Christoph Edmond Kellerman, Duke of Valma. In 1882 it was bought by Jules Marmottan. His son Paul, who lived in the house, loved to collect works of art and paintings of the First Empire, as well as furniture and bronzes characteristic of that period. Before his death, he bequeathed all his collections and his house to the Académie des Beaux-Arts de France. In 1934, it was transformed into a museum.

In 1957, the Musée Marmottan Monet received from Madame Victorine Donop de Monchy a private collection inherited from her father, Dr. Georges de Bellio, one of the first enthusiasts of Impressionist painting. The collection includes works by Manet, Monet, Pissarro, Sisley and Renoir.

In 1966, Michel Monet, the second son of the painter, inherited the Giverny estate and his father’s collection of paintings. He donated the Giverny estate to the Académie des Beaux-Arts and the collection to the Musée Marmottan Monet. Thanks to this gift, the museum now has the largest collection of Claude Monet’s paintings in the world. First of all, there is the pearl “Impression of a sunrise”, but also other works from different stages of Monet’s artistic career – the beach of Trouville, Camille, paintings of Argenteuil or Paris: the Tuileries, the Gare Saint-Lazare and those of his stay in London. Finally, we can observe a rather large collection of water lilies, which are a kind of substitute or, if you prefer, a continuation of what we can see in the Orangery of the Tuileries garden.

The works collected by Henri Duhem and his wife Mary Sergeant were added to the museum’s collection by their daughter. Nelly Duhem, who donated them in 1987, in accordance with her father’s wishes. Henri Durhem was himself a painter, post-impressionist, passionate about art and collected the paintings of his competitors.

In 1996, the Denis and Annie Rouart Foundation was established at the Musée Marmottan Monet, in accordance with the donor’s wishes. The museum currently holds a total of 81 works by Berthe Morisot: oils, watercolors, pastels and drawings, as well as 7 sketchbooks kept by the Rouart family.

In 1980, Daniel Wildstein donated to the Museum an exceptional collection assembled by his father. Over the years, the museum has received many other donations, so that today we can admire an impressive collection of over 300 paintings. They are arranged on three levels – separately, one can admire paintings by Monet, pieces from the First Empire period (1804-1814) and impressionist paintings.

Founder of the Mines de Bruay and treasurer of the Gironde, Jules Marmottan was also a collector. His taste goes especially towards the German, Flemish and Italian primitives. His son, Paul, devoted much of his time to researching the Napoleonic period, both historically and artistically. This passion naturally led him to collect paintings, sculptures and Empire style furniture, most often created for the Emperor and his family. Thus, his collection is composed, among others, of chiseled bronzes by Thomire, sofas by Georges Jacob and paintings by Carle Vernet, Louis Boilly or François Xavier Fabre.

The second son of Claude Monet and Camille Doncieux, Michel Monet, was passionate about African art and hunting. He died childless in a car accident and bequeathed the Giverny property to the Académie des Beaux-Arts and the collection of paintings inherited from his father to the Musée Marmottan. This donation includes not only eighty oils, four pastels and three drawings by Claude Monet, but also the personal collection of painters with works by his friends Boudin, Caillebotte, Guillaumin, Jongkind, Manet, Maurisot, Pisarro, Renoir and Rodin.

In 1980, Daniel Wildenstein decided to donate to the Musée Marmottan the extraordinary collection of illuminations assembled by his father Georges Wildenstein. Throughout his life, he had passionately sought out rare and high quality works, which constitute the sole decoration of his office. This donation consists of 228 miniatures which, for ages, have been detached portions of antiphonaries, missals or books of hours. It is particularly rich in French and Italian works, but also includes pieces from the German, English, Flemish and Dutch schools.

Henri Duhem, a descendant of an old Flemish family, was born in Douai in 1860. A lawyer at the Douai court, he gave up his career to devote himself entirely to painting. In 1899, he met Marie Sergeant, a young painter whom he married the following year. Henri was a comrade-in-arms of the Post-Impressionists and, like Gustave Caillebote, was a passionate collector. He acquired the paintings he liked, those of his friends and their immediate precursors, and managed to put together a very representative group of paintings, pastels and sculptures by Boudin, Carrière, Corot, Gauguin, Guillaumin, Monet, Pissarro, Renoir, Rodin, Lebourg and Le Sidaner. In accordance with the couple’s wishes, their adopted daughter Nelly Sergent Duhem entrusted the entire collection to the Académie des Beaux-Arts in 1987.