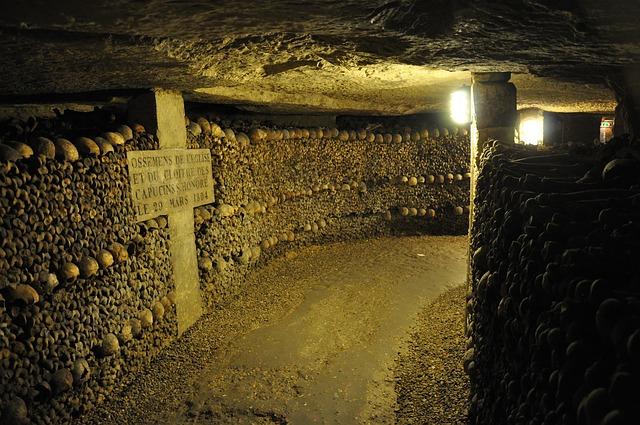 History of the catacombs of Paris

Created at the end of the 18th century, the catacombs of Paris are one of the most famous ossuaries in the world. Because of the unhealthy conditions in the Paris cemeteries, he decided to transfer his bones to the city’s subway system.
The place chosen to allocate them was the former underground quarries of the Tomb of Thisire, which were deactivated in the 15th century. The first bones transferred came from the main cemetery in Paris at the time, the Cimetière des Saints Innocents, between 1785 and 1787.

In 1786, the place was consecrated as the “Municipal Ossuary of Paris”, also known as the Catacombs, in reference to the catacombs of Rome. And in 1809, the Catacombs of Paris were opened to the public.

The catacombs of Paris in figures :

Curiosities on the Catacombs of Paris

Travel is time travel. The route passes through formations about 45 million years old. After passing through a succession of rocky layers, you will arrive at a limestone bench from the geological period called “Luteciano”.

In this part are the Lutetian limestones, which allow the production of a high quality ashlar, also called “pierre de Paris”.

Other catacombs are scattered throughout Paris, more than 300 km in total. But their access is forbidden and dangerous! Nevertheless, it is reported that several people go there, the so-called cataphiles.

How to visit the Catacombs of Paris?

The itinerary is 1.5 km long and lasts about 45 minutes.

The temperature in the catacombs is about 14°C. So, even in summer, it is interesting to take a jacket.

The entrance to the Catacombs of Paris is on the Place Denfert-Rochereau in the 14th district of Paris. You won’t get out through the entrance.

It is very easy to get to the Catacombs of Paris. The nearest station is “Denfert-Rochereau” and is accessible by metro lines 4 and 6, RER B and buses 38, 68, 88 and 216. In addition to the Orlybus, the bus comes from Orly airport.

The Catacombs of Paris are open to visitors from Tuesday to Sunday from 10:00 am to 8:30 pm. The last entrance is at 7:30 pm. The catacombs are 20 meters underground. Attention for those who cannot go up or down the stairs. Along the way, there are 131 steps down and 112 steps up. And it is only accessible by stairs.

Moreover, the visit is not recommended :

Where to buy tickets

In general, the queue to enter the catacombs of Paris is long. During school holidays, it is normal to queue for 3 hours. Indeed, in the catacombs of Paris, a maximum of 200 people are allowed at a time. You can either stand in line to buy your ticket or buy in advance on the internet to avoid queues.